We are at a transformational moment in human history.

This is the Great Turning.

This is a whole mindset of understanding that we are part of a living planet.

In contrast to the Industrial Revolution, we are understanding that the sustainability of the Earth has been brought to the brink of utter destruction by our mindless greed.

We need new ways of living and holding the land intact for future generations.

These ways must become deeply rooted in our newly acquired belief systems.

The primary belief being that we understand who we are in time.

That we are part of the Earth, and the Universe.

That we are one.

For the past eleven years, the transformation of one small part of the Earth, from impoverished land to living abundance, has taken place here at Bealtaine Cottage.

All who have made the journey here have been impacted by the energy that is spiralling from the land.

During this time I have changed the way I see life.

Entrenched belief systems have been shriven, in much the same way as the albatross was finally released from around the neck of the Ancient Mariner.

What began as an experiment with permaculture, has become a journey of joy and synchronicity.

Synchronicity is a form of coincidence powerful enough to shatter the notion that material science has discovered all there is to know about the universe.

It was the power of synchronicity to overwhelm the rational mind that held significance for the Swiss psychiatrist, Carl Jung (1875-1961),  who brought the phenomenon to light.

Jung defined synchronicity,   as meaningful coincidence, effecting the breaking through the “rationalistic shell” of the modern scientific mind.

The experience of synchronicity is articulated by many rational and educated people, who become aware that there is more at play in this world than what science can explain.

“The Great Turning is a name for the essential adventure of our time: the shift from the industrial growth society to a life-sustaining civilization.” ~ Joanna Macy

Join the good life at:

You will then receive the full blog as published twice each week.

This amounts to 104 publications per year, at a cost of 12 cents each!

Click on button below to make your subscription. (The first three extended blogs are already on the site!) 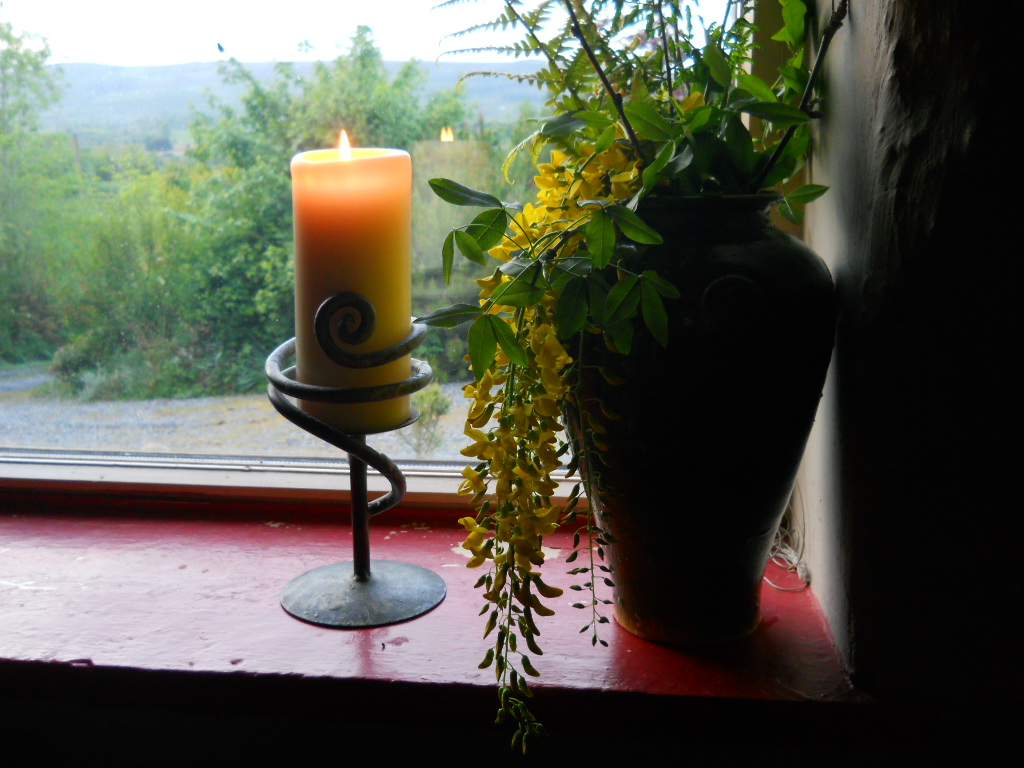 Irish cottages are fairly dark houses, designed to be snug and keep in the heat, working well it has to be said…but I love the light, so have judiciously placed mirrors, here, there and everywhere!

This is one near the north window, reflecting light from the west window.

I never turn down the offer of a mirror, even a broken one and have even used bits of mirror in the garden to reflect light onto plants.

Contentment is often found to be lacking in the world today.

So many people want more and more and, as they acquire material goods, become weighted down with the accumulation of such.

Materialism is like the albatross in the poem, “The Rime of the Ancient Mariner.”

When the mariner finally looked down upon the creatures in the sea around him and recognized their divinity, the dead Albatross finally fell from his neck…he became one with all life…contentment descended upon him.

To free oneself, it becomes imperative to examine the inner self and one’s values and beliefs.

There is an old saying, a proverb if you like, that I often heard as a young woman growing up in my home town of Omagh.

Of all we know life to be, three aspects of it will guide your journey: truth, nature and knowledge.

These three things will light the life path and bring you forward, safely and in contentment.

My paternal grandmother had little in terms of money or property, but was immensely wealthy of spirit and generous with all.

Her own mother was an equally remarkable woman and incredibly attuned to the natural world around her.

She loved the world outside of her little lime-washed cottage and slept in a big, brass bed in the barn, all year round, waking with the birdsong and living a long, contented life.

Happiness, contentment and the recognition of Divinity in all life, were never strangers on her journey.

Bealtaine Cottage is free and has over 850 blogs, as well as over 3,500 photographs.

Bealtaine Cottage Good Life is a mere 12 euros per year and allows me a small income, to keep doing what I love doing most…writing about Mother Earth and photographing her.