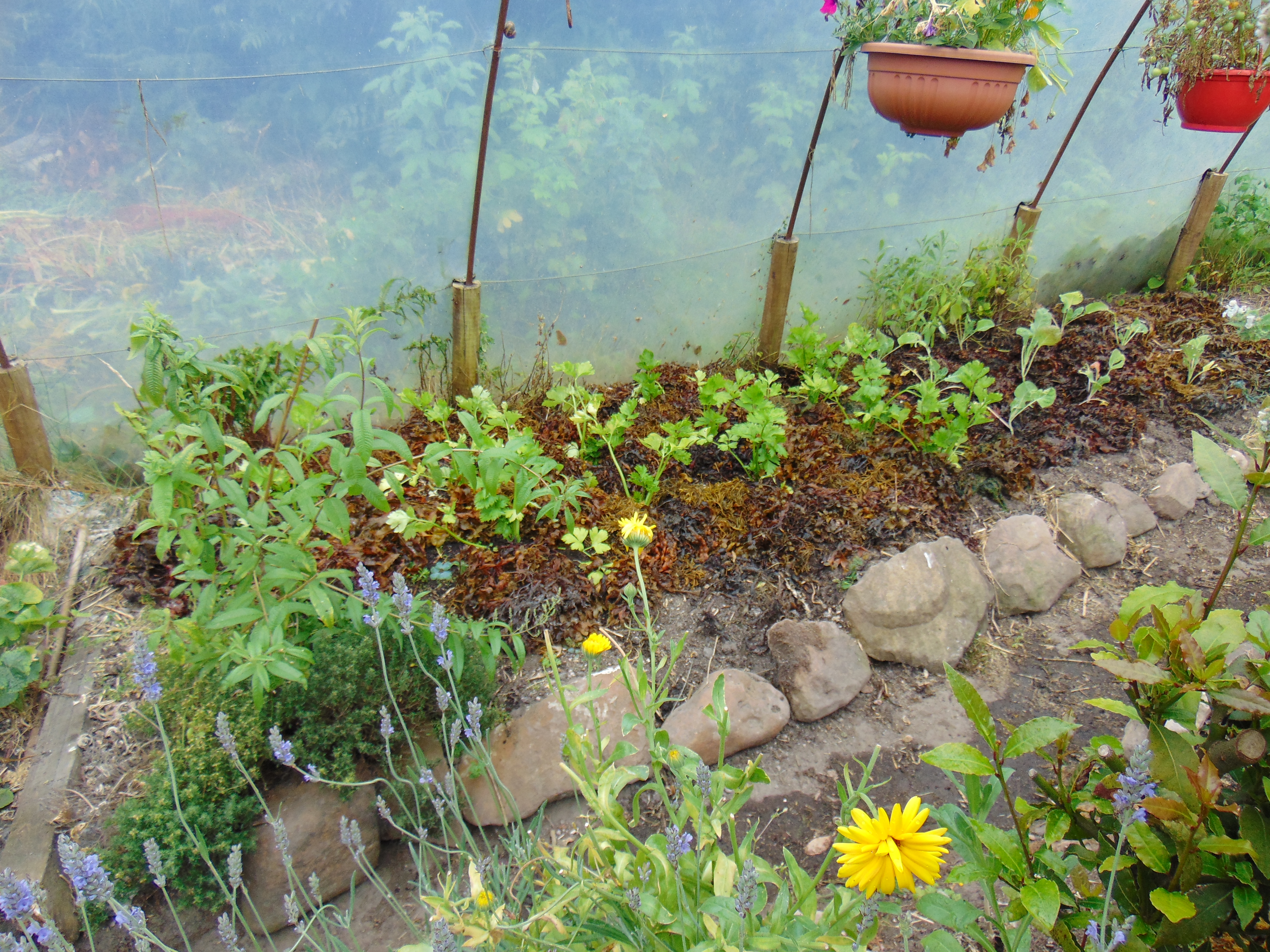 After so much rain during the past few weeks, it was a relief to have a relatively dry day!

You may remember that last week I visited the Atlantic shoreline to harvest some seaweed to use on the garden.

The strands to the south of Sligo town have piles of loose seaweed here and there along the beaches.

Always only ever take the loose stuff…don’t pull seaweed from stones as these form habitats and are essential to the ecology of the seashore!

In the end I managed about three big bags of seaweed and headed home with my foraged booty!

The first thing I do is to spread it on the gravel around the cottage and allow the rain to wash out excess salt.

After about a week, I start to spread the seaweed around established plants in the garden and tunnel.

The seaweed acts as a wonderful feed and a weed-suppressing mulch!

One of the best things about growing food in the garden is the opportunity to use local and near resources that are free to be foraged or collected…seaweed is an organic fertiliser!

Seaweed is washed in by the tide, so is easy to forage!

Only ever take what you need!

It can be used straight away too by the way!

It’s packed with Potassium and Nitrogen, bot wonderful for the garden!

In the next blog, over at Bealtaine Cottage Good Life, I will explain how to make Liquid Seaweed Manure…along with lots more pics of the vegetable beds mulched with seaweed and how this feeds the plants! A storm is making its way in from the Atlantic as I write this and a cold wind blows through the window. I took these pics earlier today when it was positively hot and humid. It’s strange how quickly the weather can change! The ground is very dry, the spring well runs low and lots of rain is needed, so I am happy to see the storm blow in!

Painted Mountain Corn, Poppies and Feverfew are jostling for space in the tunnel. Still high summer in many respects and flowers continue to bud and bloom.

Here in Ireland, Corn, or Maize is usually called “sweet corn”. Sweet corn is harvested earlier and eaten as a vegetable rather than a grain. This one that I am growing is from the Native American seed bank of Corn, known as “Painted Mountain.”Corn has shallow roots and is susceptible to droughts, intolerant of nutrient-deficient soils, and prone to be uprooted by severe winds, so growing it in the protective atmosphere of the tunnel makes good sense.

It has taken two years, but finally, the Leek has seeded, with multiple seed heads like this one…really ornamental and worth growing on as flowers I think!  Leeks are easy to grow from seed and tolerate standing in the ground for an extended harvest. Leeks usually reach maturity in the autumn months, and they have few pest or disease problems. Leeks can be bunched and harvested early when they are about the size of a finger or pencil, or they can be thinned and allowed to grow to a much larger mature size. Really tasty in soups, so I’m inclined to leave them in the ground and pull them as needed.

Leek is typically chopped into slices 5–10 mm thick. The slices have a tendency to fall apart, due to the layered structure of the leek. There are different ways of preparing the vegetable:

The veggie garden, all new and improved with the terraced beds…just waiting to see if the terracing directs the water when a storm hits…as it may do very soon!In the Andes farmers have used terraces known as andenes for over a thousand years to farm potatoes, maize and other native crops. The Inca also used terraces for soil conservation, along with a system of canals and aqueducts to direct water through dry land and increase fertility. This has become part of the approach for growing in Permaculture…conserving and adapting to the environment as found, rather than trying to change the lay of the land!

One of the Poppies in the tunnel today, all papery and delicate…

Drove to the ocean yesterday.

Rosses Point in Sligo on the west coast of Ireland.

Took Jack and he loved it too!

Jack approves of the sea and the sand…he got really excited!

And he even found friends on the sand…

Tonight is the Eve of Bealtaine, the eve of summer, SummerEve…

A jet in the evening sky heading into the west, probably to America.

The setting sun has illuminated the trail in the dusk.

Returning home…The lane-way at Bealtaine, now densely planted with trees and shrubs and other living things.

It is almost impossible to see the cottage!